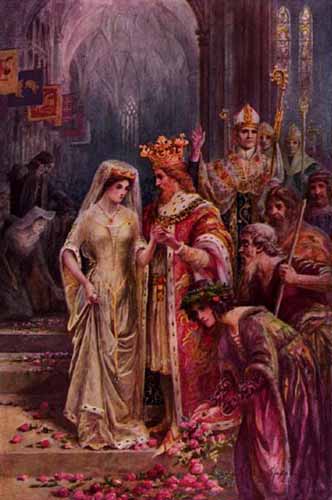 The Knights of The Round Table

The Roman Amphitheatre at Caerleon,

The Holy Grail and

The Lady of the Lake

(History of the Kings of Britain)

The reliabilty of this work has long been a subject of

and one which puts Arthur in a historcal context.

The Arthur Story according to

and his version’s political agenda 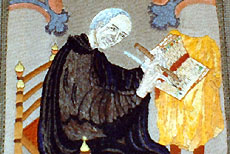 According to Geoffrey of Monmouth

History of the Britons

The first written mention of Arthur as a heroic figure

against the Anglo Saxons

Where were Arthur’s Twelve

Victories against the Saxons?

The Battle of the City of the Legion

The Battle of Badon Hill

army then defeats them at Liddington Castle,

King Arthur’s twelfth and last victory against the Saxons

The Battle of Camlann

Traditionally Arthur’s last battle in which he was

mortally wounded although his side went on to win

No contemporary writings or accounts of his life

but he is placed 50 to 100 years after the accepted

King Arthur period. He refers to Arthur in his inspiring

poems but the earliest written record of these dates

from over three hundred years after Taliesin’s death.

The Elegy of Uther Pendragon

From the Book of Taliesin

as a Possible Camelot

A 12th Century Norman ruin on the site of what is

reputed to have been a stronghold of Uther Pendragon

His origins and development

From wise child with no earthly father to

The Prophecy of Merlin

as a Possible Camelot

Drawn from the Stone or received from the Lady of the Lake.

with both swords called Excalibur. Other versions

in the 5th Century CE

Celtic Kingdoms Prior to the

The Saxon Invasion of Britain

From the departure of the Romans from

Britain to the establishment of sizeable

Arthur’s uncle:- The puppet ruler of the Britons

controlled and eventually killed by Vortigern

The Massacre of Amesbury

An alleged massacre of Celtic Nobility by the Saxons

at a “Peace” conference

King Arthwys of the Pennines

Ruled the Kingdom of Ebrauc

A warrior King born in Gwent and associated with

Caerleon, a possible Camelot. Although over 100 years

later than the accepted Arthur period, the exploits of

Athrwys may have contributed to the King Arthur Legend.

He became King of Ergyng, a kingdom between

Angles under Ida seized the Celtic Kingdom of

Although much later than the accepted King Arthur

to regain his kingdom may have contributed to 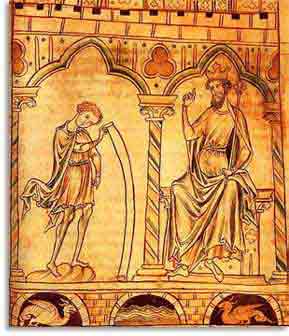 from Emrys (Merlin as a wise child)

Merlin was originally known as Ambrosius with the

later name Myrddin being based on his place of birth

Caer Myrddin now . Merlinus was a

latinisation which became Merlin. His character may

have been based on more than one person.

Emrys is the Welsh version of Ambrosius hence

Dinas Emrys (The Fort of Merlin) which is said

to have been Vortigern’s stronghold in North Wales

An earlier ruler than King Arthur and not a heroic figure.

He is credited with policies that weakened Celtic Britain

to a point from which it never recovered.

Although there are no contemporary accounts of

his rule, there is more written evidence for his

existence than of King Arthur.

And made a castle free.

in Sir Kay's harness, and how he

smote down a knight.

How Sir Lancelot jousted against

four knights of the Round Table,

The Passing of Arthur 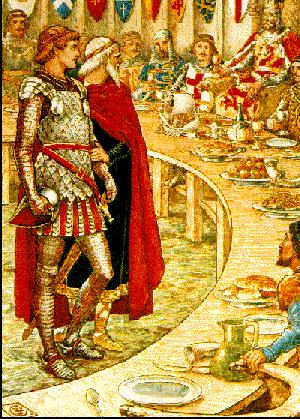 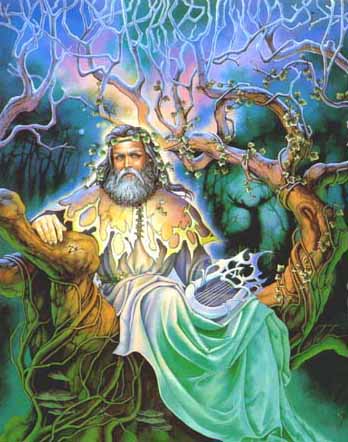 Merlin & The Tree of Life 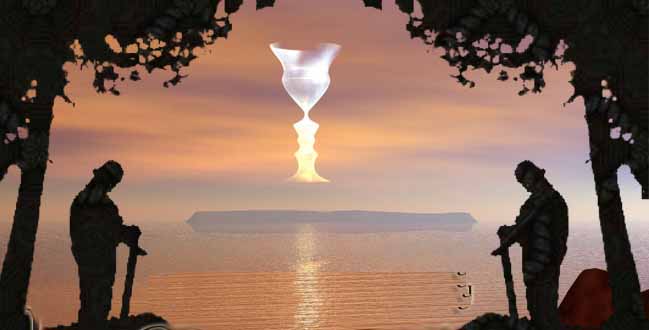 If you run a Theosophy Group, please feel

free to use any material on this site.

The Most Basic Theosophy

A quick overview of Theosophy

and the Theosophical Society

If you run a Theosophy Group you

can use this as an introductory handout.

A Free Intro to Theosophy

One liners and quick explanations

About aspects of Theosophy

H P Blavatsky is usually the only

Theosophist that most people have ever

heard of. Let’s put that right

The main criteria for the inclusion of

links on this site is that they have some

relationship (however tenuous) to Theosophy

and are lightweight, amusing or entertaining.

Topics include Quantum Theory and Socks,

A selection of articles on Reincarnation

Provided in response to the large

number of enquiries we receive at

Cardiff Theosophical Society on this subject

and I Don’t Wanna Shout

To Theosophy and Devachan

Death & How to Get Through It

Lentil burgers, a thousand press ups before breakfast and

seems to get most of us in the end. We are pleased to

present for your consideration, a definitive work on the

subject by a Student of Katherine Tingley entitled

It’s all “water under the bridge” but everything you do

makes an imprint on the Space-Time Continuum.

No Aardvarks were harmed in the

A Modern Revival of Ancient Wisdom

The Conquest of Illusion

A compilation of H P Blavatsky’s

writings published after her death

Esoteric Christianity or the Lesser Mysteries

The Early Teachings of The Masters

A Textbook of Theosophy

A Collection of Fugitive Fragments

From the Pen of

Translated from the Sanskrit

The Ocean of Theosophy

A new structure for the

as Theosophy Cardiff Separates from the

Tekels Park to be Sold to a Developer

Tekels Park is a 50 acre woodland park in Camberley, Surrey, England which was purchased for the Theosophical Society in England in 1929.

Concerns are being raised about the fate of the deer and other wildlife and there has been no comment on this issue from Tekels Park Estate Limited, who manage the Park on behalf of the Adyar based Theosophical Society in England.

Tekels Park is sanctuary for  animal wildlife including deer, foxes, squirrels, badgers and stoats, and for birdlife including sparrowhawks, woodpeckers, tawny owls and many more. There are many species of trees including 3 types of redwood, ginkgo, eucalyptus, red oak, tall magnolias and lebanese cedars.

Madeleine Leslie-Smith, a long-term resident of Tekels Park wrote 'A personal recollection' in 1996. She commented: 'Tekels Park is in reality a mini Nature reserve ... It is up to us to preserve it from encroachment so that it may increasingly become a centre of Peace and dynamic spirituality'

There is Confusion as the Theoversity moves out of Tekels Park to hired venues in Southampton, Glastonbury & Chorley in Lancashire while the leadership claim that the Theosophical Society will carry on using Tekels Park despite its sale to a developer.

The Sale of Tekels Park to a Developer

Many feel that the sale of a sanctuary

for wildlife to a developer can only mean

disaster for the park’s animals

The Seven Principles of Man  Karma

The Start of the Theosophical Society

History of the Theosophical Society

History of the Theosophical Society in Wales

The Three Objectives of the Theosophical Society

Explanation of the Theosophical Society Emblem

The Theosophical Order of Service (TOS)

A Study in Karma

Man and His Surroundings  The Three Fates  The Pair of Triplets  Thought, The Builder

The More Modern View  Self-Examination  Out of the Past

Esoteric Teachers  The Constitution of Man  The Planetary Chain

The Human Tide-Wave  The Progress of Humanity 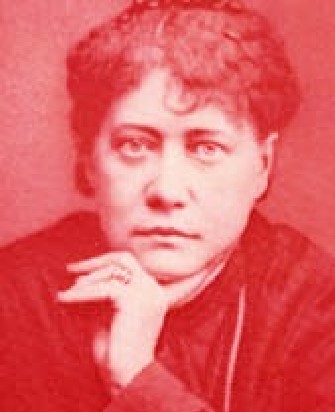 The Founder of Modern Theosophy

A Land of Mystery

A Case Of Obsession

The Mind in Nature

Is the Desire to Live Selfish?

Roots of Ritualism in

A Year of Theosophy

Dialogue On The Mysteries

Of The After Life

Do The Rishis Exist?

The Kabalah and the Kabalists

Thoughts on the Elementals

The Death of Art and Beauty

Gems from the East

A Birthday Book of Axions and

Articles about the Life of H P Blavatsky

The Blavatsky Lecture of 1970

The Life of H P Blavatsky

Edited by A P Sinnett

Try these if you don’t live in Wales

and are looking for a local group

Please tell us about your UK Theosophy Group

into categories and presented according to relevance of website.